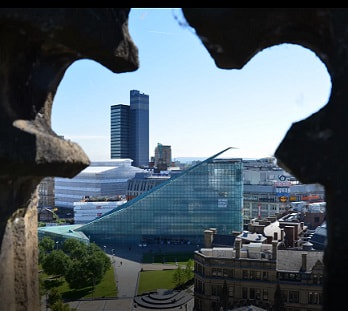 The Manchester skyline on this stunning virtual tour of the city
By Gideon Richards
​
​Huddersfield Civic Society’s virtual tour of Manchester (watch it on this link) by Jonathan Schofield Manchester Tours was one of those rare zoom meetings where there were very few questions because everyone was spellbound and really focused on the imagery.

Watching via the internet was not quite being in Manchester itself but I think it’s fair to say left many of us wanting to go and explore the buildings in real life.

The tour highlighted the ability of good and great design to make a statement while still integrating into its surroundings, even through subtle details such as aligning the façade with its next-door neighbours. The tour also demonstrated that well designed open spaces greatly enhance the built environment and people’s use of the space.

See for yourself what you think, but I for one hope Kirklees Council takes the tour and ensures our towns incorporate some of the lessons learned in Manchester. 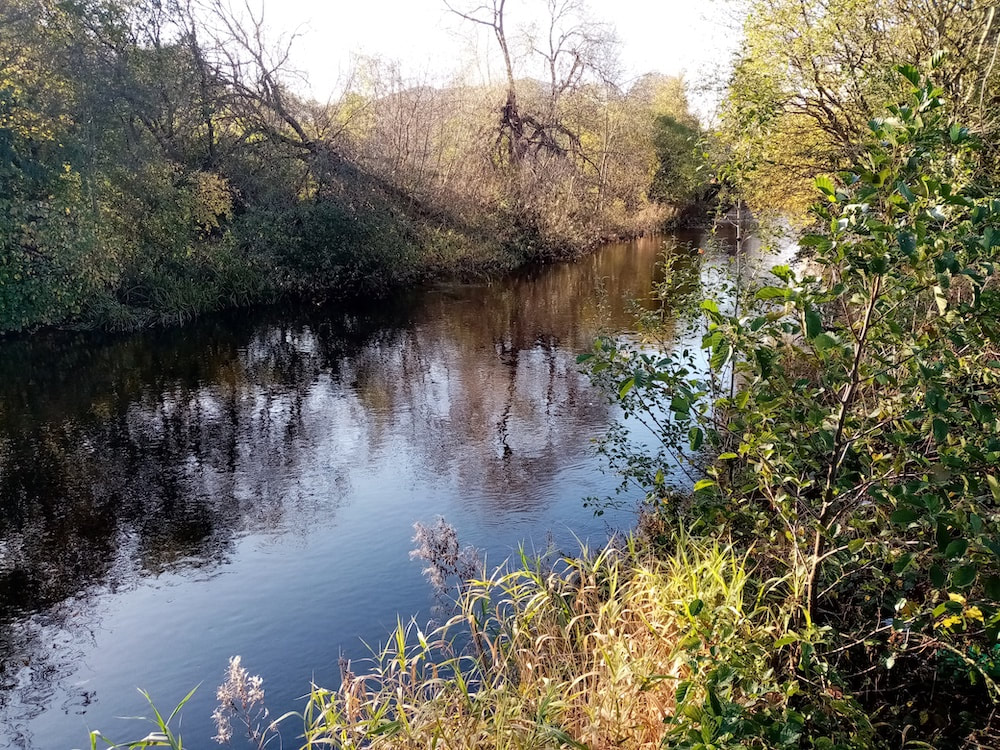 The River Colne in Huddersfield: a great asset but undervalued.
Safe access to the river at Kilner Bank and, right, gateways to natural greenspaces on Snow Island.
The River Colne at Milnsbridge and, right, the Greenway at Colne Bridge a fantastic asset.

Huddersfield’s Queensgate Market is 50 years old. Chris Marsden, who has investigated its history, revealed the passion, inventiveness and influences behind the creation of this architecturally important building.

He also demonstrated how its unusual hyperbolic paraboloid design provided a dynamic, yet functional solution for achieving a light and airy market hall.

In response to audience questions on its future use, Chris suggested exploring the potential of a food court and a gallery but he was unsure if the acoustics would allow its use as a sound space.

The evening, the second online event of HCS this year, demonstrated that the Queensgate market building is an architectural gem.

Returned to its former state it could play an important part of the heritage of the town. All it needs some improvements to services and a new purpose.

Chris Marsden is a former chair of trustees of HCS. 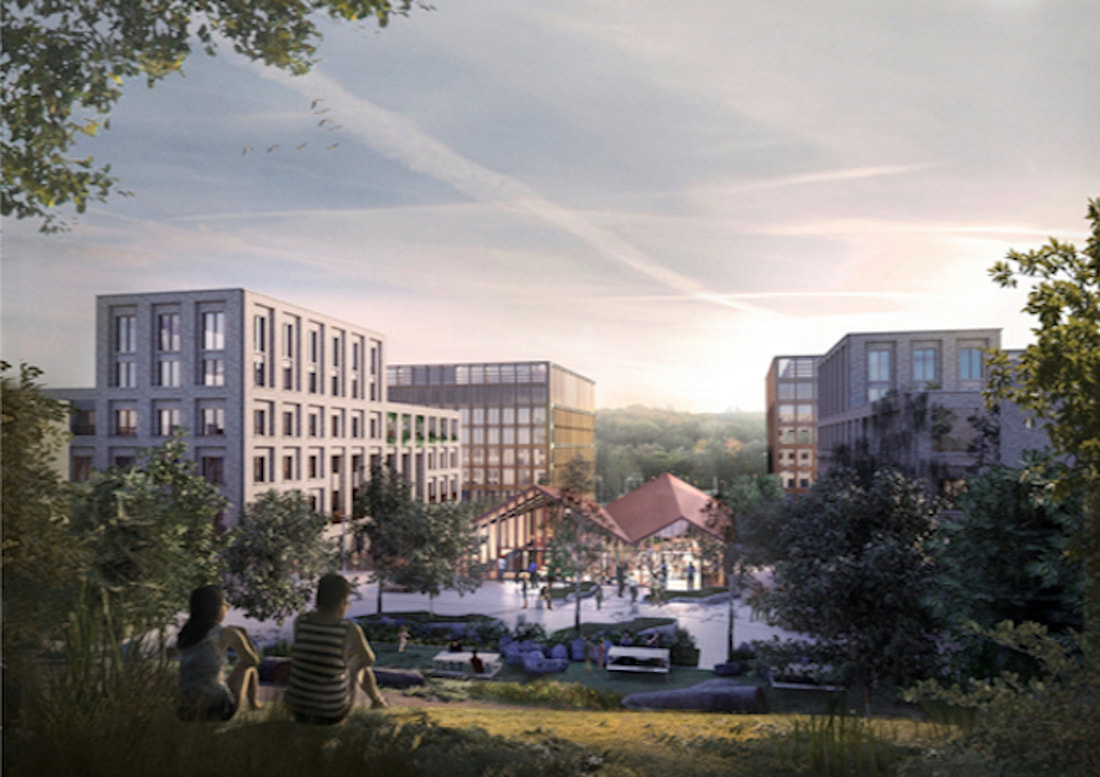 Annual lecture​: Reinvention across the Pennines 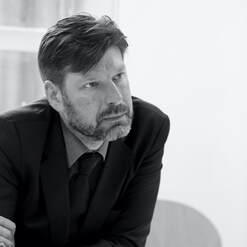 BY GEOFF HUGHES
​
Alex Whitbread, a partner at Feilden Clegg Bradley Studios, gave the Society’s annual joint lecture with the University of Huddersfield School of Art, Design and Architecture.

His talk, on March 3, 2020, in the University’s Charles Sikes Building, was entitled A Decade of Reinvention across the Pennines: A Perspective from FCBStudios.

Alex covered a wide range of developments across the North, ranging from dramatic new city centre schemes in Leeds and Manchester through to complex redevelopments around heritage sites from Stoke to the South Bank of Leeds.

An excellent presentation showed the range of techniques used by architects when master-planning a major new development, as at Kirkstall Forge, near Leeds (above) through to modelling potential future building combinations and designs with their differing impacts on sightlines.

The talk concluded with examples close to Huddersfield and mentions of the key role of integrating transport, primarily improvements in rail transport, into new urban developments. 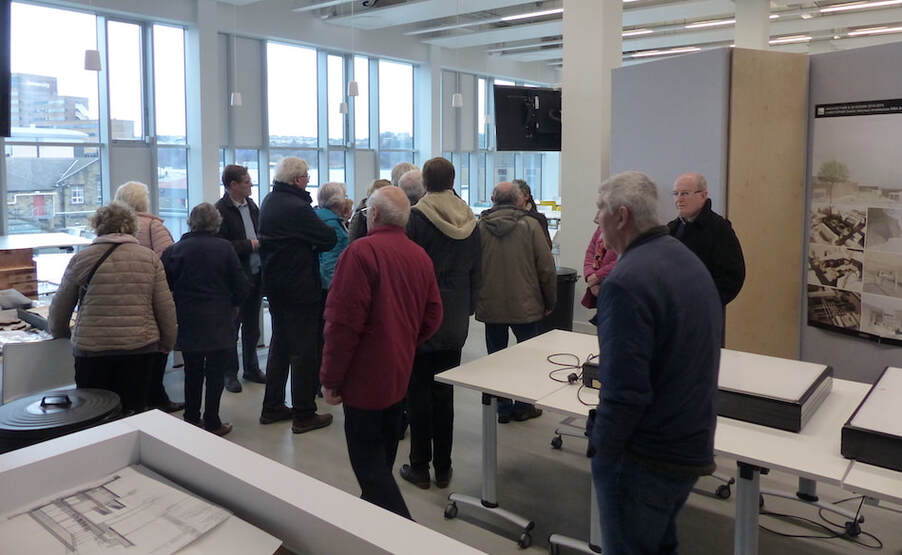 BY JOHN LOCKWOOD
​
Barbara Hepworth would have been amazed to see the huge glass enclosed space and dramatic stairway on the new building which carries her name at the University of Huddersfield.

Over twenty members of the Civic Society were privileged to enjoy a guided tour of the newly completed £30 million showcase building created for the students of the School of Art, Design, Architecture and Fashion, in December 2019.

Spectacular and visually stunning,  this new building is situated canal side, opposite an elegant university textile mill conversion of earlier times with south facing views to Castle Hill.

Leaving behind the myriad of computers, 3D printers, the tools of modern architecture and designers, we walked across a newly landscaped area to view the restored, Grade Two listed bath house which the university had inherited from an industrial age.

At great expense it has been allowed to show all the signs of its past while it has been sympathetically converted into a small cafe and exhibition space.

We are grateful to our guide Helen Chadwick and to Carl Meddings of the School of Architecture who arranged our visit.

Harry started his career as an apprentice at Bamforth’s before opening his own studio.

At that time he also became involved with publicity for Karrier Motors, who made commercial motor vehicles in Huddersfield.

Karrier Motors was taken over by Rootes in 1926. It was at this time that Harry began working as a freelance photographer for the Huddersfield Examiner.

Helen covered many other interesting and varied subjects, for example, mill working, farming, schools and hospitals. There was something of interest for all the audience.

We were in admiration of the photographer with all his equipment capturing moments in and around Huddersfield and Holmfirth. Quite different to today, using our mobile phone cameras. 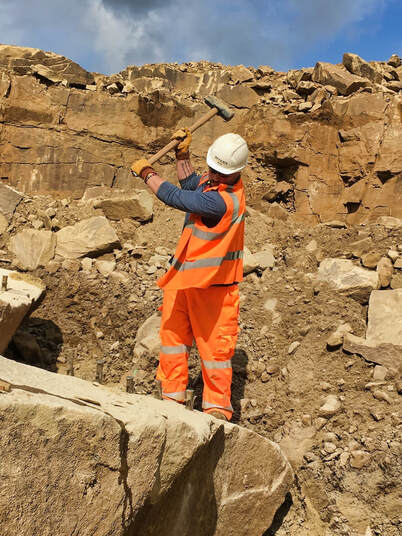 A morning visit in August 2019 gave 26 HCS members, friends and relatives an insight into the processes which have made Johnsons Wellfield at Crosland Hill the country's most distinguished producer of natural York sandstone.

Having been greeted and fitted with safety helmets, ear plugs and jackets, the group were split into two to accommodate  a visit to the stone yards, cutting sheds and the working face of the quarry.

Guides Neil and Nick, whose families had had long associations with quarrying in the area, shared their knowledge in explaining the geology of the quarries and the uses for the stone which has been used in towns and buildings across the UK and abroad.

We were taken to the yards where large stone blocks are stored, including one  engraved with the face of Compo (Bill Owen), which is awaiting transportation to Holmfirth.

In the sheds – ear plugs needed – stone was being precision-cut to different sizes and shapes with the aid of computers, supervised by qualified masons. Two  types of machinery were in operation; a diamond toothed circular saw and a reciprocating saw which uses diamonds for fine cutting. Huge amounts of water are required to keep the cutting edges cool, but it is recycled.

Minibuses transported the group to the bottom of the huge quarry along a rough track where a massive digger was moving rock and soil. The driver then swapped the bucket for a picker, using its cutting point to manoeuvre behind a slab on the quarry face and remove a huge lump of sandstone. This  process was repeated a number of times with skill and apparent ease.

The next stage vividly demonstrated how one man could split a huge rock to a more manageable size. For this he used 'duck and feather' wedges, placing about six in a line, hammering each in turn and constantly checking if the block was splitting along the correct line and listening for a change of sound as it began to split. Again, all achieved with apparent ease but clearly demonstrating the skill and training of the quarry workforce.

Back in the yards, the group watched the splitting and dressing of stone by two men preparing riven  paving slabs which is all done by hand and ear;  listening to the stone splitting as they use a hammer and chisel to produce the traditional slabs.

Thanks were given to the organisers and guides who provided a very thorough insight into one of Huddersfield's most celebrated industries. 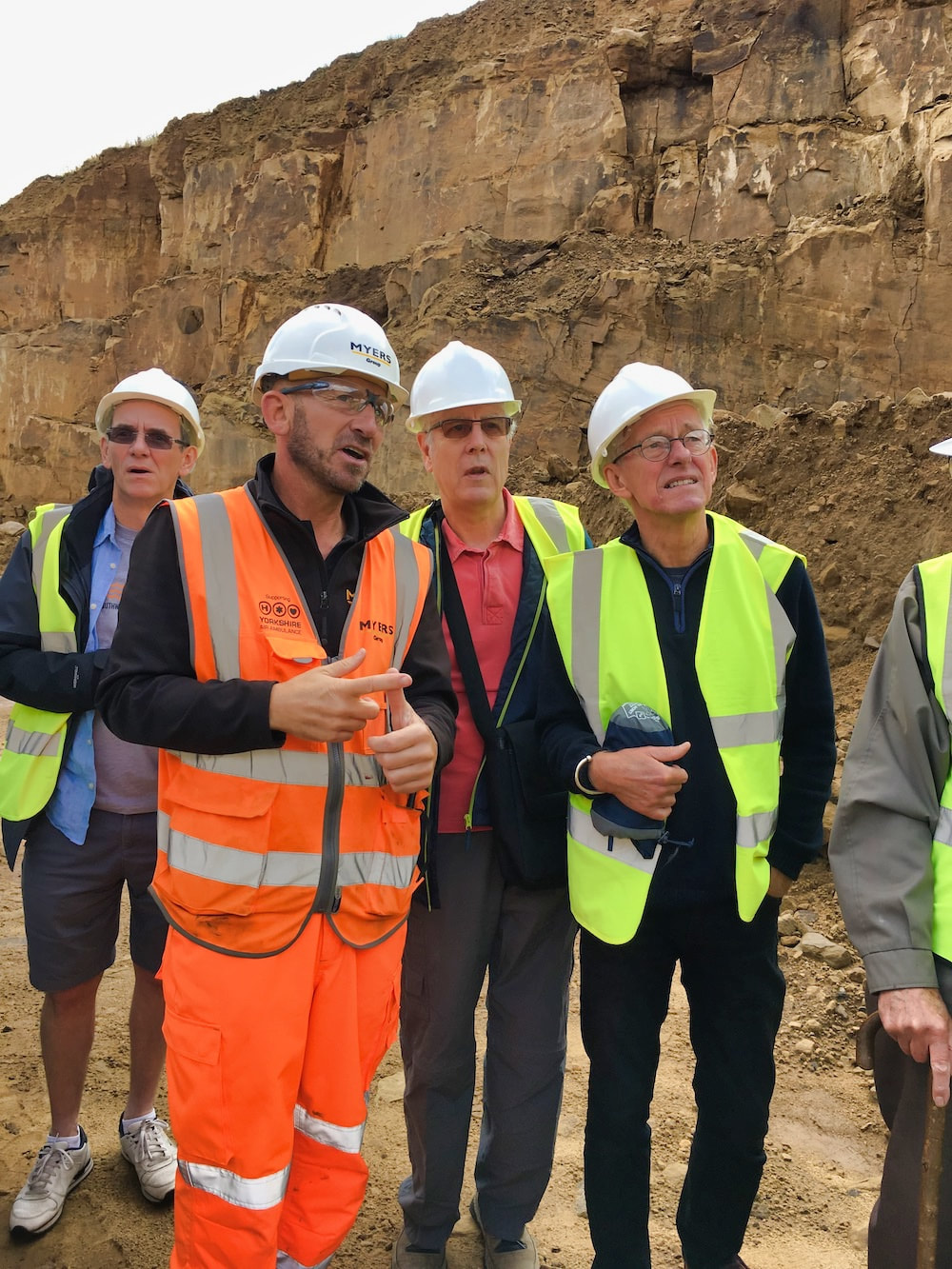 Meeting:  The future of travel in Kirklees

Professor Greg Marsden (University of Leeds) gave an absorbing address on the future of travel in Kirklees.

Rather than focussing on autonomous vehicles or flying cars, he drew attention to the important changes on-going in society which have reduced the amount that people are travelling.

Per head of population, driving has reduced by 11% since 2005 and in particular in under 30s and in the most wealthy groups in society.

It is true for all categories of journey from commuting to leisure with only the trip to school staying more or less the same.

This comes as a bit of shock when one sees the on-going congestion problems. However, these result more from a concentration of population growth along already busy corridors, more people but generally travelling less.

Not only are the trends surprising, but they are also a positive factor in the agenda to decarbonise transport and perhaps point the direction to further change.

He turned his attention to what the data on travel patterns might mean in Kirklees, noting that this would mean different things in different places:
​
While it was evident that the on-going shifts in travel behaviour have not yet been grasped as an opportunity for change, the potential to capitalise on them will vary depending on what land is made available for future population and employment growth.

This again varies across place although Huddersfield, like most towns and cities is facing a challenging retail environment and could take a lead on shifting over to housing-led revitalisation of the city centre.

This puts people in places with great accessibility by public transport and that remains central to people's capacity to live less car dependent lifestyles. In a very lively discussion of the presentation it was clear that, at the heart of a vision for a less car dependent Kirklees, comes the need for a clear vision for the sort of place citizens wanted to live in.

Meeting:  Talk on Huddersfield in 50 buildings

Report by​​ David Wyles
​
​Chris Marsden, former HCS Chairman, outlined some of the 50 buildings identified in his book Huddersfield in 50 Buildings at an illustrated talk to HCS members on Tuesday, April 2, 2019.

Chris's expansive knowledge of the history and architecture of the town was matched by some outstanding photography by Andrew Caveney, as well as many historic images.

They included Queensgate Market, the John Smith's Stadium and, a favourite of Chris's, Broadbent's Bath House on Queen Street South, a rare, possibly unique example of a purpose-built bath house for foundry workers.

Chris not only outlined what he felt was special about each building but gave a glimpse of the remarkable stories behind such features as the lion on Lion Arcade, the building of Estate Buildings and the outstanding engineering of Lockwood Viaduct.

The talk followed the society's AGM which highlighted the progress and achievements over the past year.
​
Chris's book, published by Amberley Publishing is available from local bookshops and costs £13.49.

Meeting: Lecture on the Eddington development

​A large audience of Civic Society members, guests and students attended our annual lecture held jointly with the University's School of Architecture in March 2019.

​The new Oastler building is proving an ideal venue for such important events. Our speaker was Kristof Keerman, Project Architect from Stanton Williams, a prestigious, large London-based practice.

We learned how they, with a number of similar practices, including Wilkinson Eyre, of tilting Tyne Bridge fame, are creating a new suburb for Cambridge on greenbelt land on a site similar in size to the large plots of the newly released development land in Kirklees.

Built at a high density yet with generous sized rooms, the combined skills of so many different designers are creating an innovative settlement for the future. It was interesting to hear of the project models made to get the juxtaposition of buildings, pathways, cycle tracks and roads correct.

Building to a high density allowed space in the development for leisure purposes. Besides an attractive town centre, there is a nursery and junior school, community centre, health centre, supermarket and shops.

Amazingly, each flat or house has a separate sheltered space for two cycles!

Built at one grade lower than 'Eco-house standard, dwellings are provided with heating and hot water from a community boiler and rainwater is recycled around the site and incorporated into an attractive small lake. Even the waste bins are doing their bit – each being fitted with an electronic chip which indicates when they are full and should be collected!

We felt the timing of this well illustrated talk was fortuitous giving food for thought when new large housing schemes are planned in Kirklees.